Driving While Texting and Other Risky Behavior

A recent AAA Foundation for Traffic Safety study found that 88% of drivers between the ages of 19-24 engaged in what they categorize as “risky behavior” i.e. speeding, running a red light and/or texting.    But, it is not just young millennials that are driving dangerously.   The study also found that 79.2% of drivers between the ages of 25-39, and 75.2% of those between the ages of 40-59, also admitted to engaging in this risky driving behavior.   It is not surprising that the amount of traffic deaths in the United States has risen, with 35,092 fatalities in 2015.   What is astounding is that the study revealed that young millennials believe that this type of behavior while driving is okay! 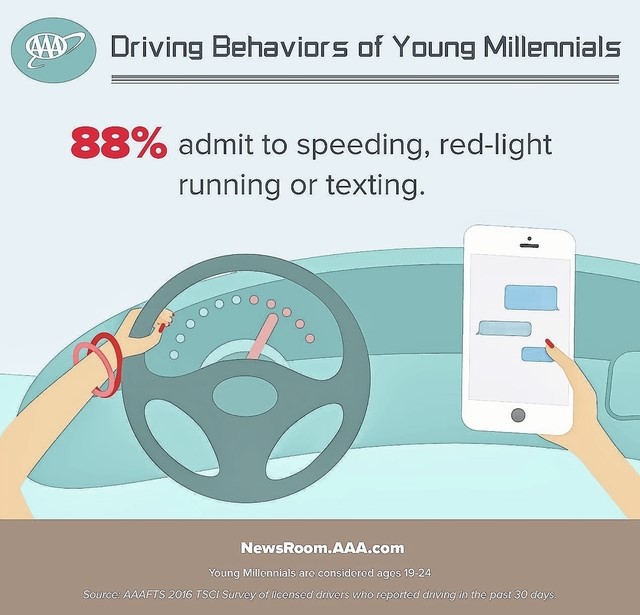 The 2016 Traffic Safety Culture Index, which surveyed 2,511 licensed U.S. drivers ages 16 and older, also revealed that just over 40% of drivers admitted to having read a text or email while driving in the 30 days leading up the study.   Two thirds of the participants believe that using a hands-free phone is acceptable.

According to AAAFoundation.org, someone is killed every 13 minutes on U.S. roadways.  That does not include the 2.3 million people who are seriously injured in car crashes.  The culture of distracted driving needs to change.    Drivers need to understand that hitting send for one simple text message or pressing the gas to get through that yellow light is the type of behavior that may lead to horrific crashes and even death.

If you have been charged with a Bucks County traffic offense for speeding, running a red light, or texting while driving, please contact the law office of Saile & Saile to speak to one of our knowledgeable attorneys who can help defend you in traffic Court.

Caterina Gatto Saile focuses her practice on criminal matters and DUI defense in Pennsylvania, New Jersey and Delaware. She attended law school at Widener University School of Law where she received her Juris Doctor degree